You know me- unless we’re talking about baked goods (we’re not), I just can’t follow a recipe; not even a good one… And most of the time, it works out in my favor.

This is one of those times.

While doing my regular, run-of-the-mill grocery shopping this week, I grabbed some eggplant and yellow zucchini. Perhaps I was inclined to do so because the only thing our garden yielded this year was basil, but hey, who knows.

Of course, I didn’t actually plan on what I was going to make with these vegetables.

Naturally, I typed the words ‘eggplant’ and ‘zucchini’ into Pinterest and up popped several yummy looking recipes.

I wasn’t in the mood for anything coated in bread crumbs- be it fried or baked; and then I stumbled upon THIS delightfully tempting recipe.

Though eggplant is hearty enough to stand alone without meat, my marathon running husband would not be satisfied without a substantial amount of protein at dinner time, so I added some chopped up chicken breast tenderloins (which I cooked in a slow cooker to keep this simple recipe, well… simple).

Then there’s me: my pregnant and indulgent self wouldn’t be satisfied without some sort of grain-y, carb-like side to pair all those veggies with. I went with a pre-seasoned 5 minute couscous (Near East brand; roasted garlic + olive oil) to keep things simple and quick; but you could substitute quinoa, rice, potatoes, pasta, or nothing at all if you so choose. That’s what I love about cooking. You can make just about anything your own!

Lastly- I used dried parsley instead of fresh because it’s what I had (but stuck with the formentioned fresh basil since I have an abundance of the herb), and I added balsamic vinegar because I thought it would add another level of flavor.

Oh!  I also decreased the garlic by an entire clove; the author of the original recipe mentions it’s quite heavy on the garlic flavor, and garlic tends to stick with me longer than it does most people (not to mention it makes me slightly nauseous after the eating while pregnant, so there’s that as well).

Here’s my complete, modified version of the recipe, though I highly suggest mixing it up and making it your own! 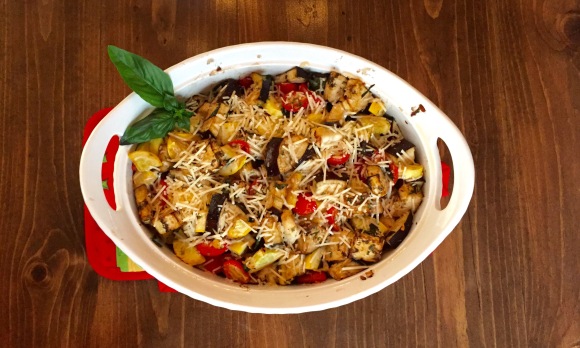